Global consumption of animal proteins has been rising, apparently inexorably, for the past six decades. The coronavirus pandemic has finally changed that trajectory.

The Food and Agriculture Organization of the United Nations estimates that meat production—a decent proxy for consumption—dropped in 2019, and it forecasts a decline again this year. Last year was only the second since 1961 in which production fell; two consecutive years of decline is unprecedented and could be the start of something durable. We’re already at peak pasture as far as demand is concerned, and it looks like we’re also approaching peak beef, even in places like steak-crazed Brazil.

As Bloomberg News employees note, the 3% drop in per-capita meat consumption expected for this year will be the biggest decline since at least 2000. But there’s more to it even than that, especially considering what that could mean for the environment and climate change.

Meat consumption changes in tandem with two factors: population and overall wealth. Growth in the former is slowing; the coronavirus pandemic certainly impacts the latter, although meat production didn’t fall even during the global financial crisis.

When markets do reach their peak, growth within them can only come at the expense of a comparable good. If we’re nearing peak meat, that means that the only way to grow the market for one meat is to take market share away from another one. So it’s worth looking at how the market for meat has grown over the last six decades in both absolute and relative terms.

Here’s the absolute. The FAO tracks production of 18 meats including camel, guinea fowl, and wild game, but only three are significant in global volume: beef, pork, and chicken. Global meat production in 2018 totaled 340 million tons; 302 million of that came from these three.

Look closely at that chart, and it’s apparent that pork and chicken production are growing at a greater rate than beef production.

If we look at these three in relative terms—as a percentage of total meat consumption—we see two things. The first is that their total market share has held remarkably steady over time, between 85% and 88% of total production for the last five-plus decades.

Here’s why these trends matter for the climate. Beef production is an extremely high-emitting sector of global food production. Emissions from beef production are about 10 times higher than from either pork or chicken. Beef emissions also aren’t just from the farm itself; they’re also from land use change, such as deforestation to make space for grazing. Ways of reducing farm emissions are under development. Burger King expects its lemongrass-infused bovine diet to cut emissions by a third during the last three to four months of a cow’s life (a contention still awaiting academic peer review).

Reducing emissions from land use will also be critical in the future, as agriculture plus forestry and land use account for 18.5% of global greenhouse gas emissions. There may be technological solutions to reduce agriculture emissions, and certainly the market has confidence in the companies promising them. Digital crop-trading company Indigo Ag is now the world’s most highly-valued agriculture tech startup.

Beef uses lots of land and emits a lot from the land it uses. But by any number of measures, beef consumption looks very near its peak, and the investors betting more than $1 billion on alternative proteins this year are hoping that their portfolio companies can drive meat demand down further. For now though, the easiest and the nearest-term solution for reducing land use emissions is simply to use less land. Substituting chicken for beef does this already on the margin; a measurable shift away from beef consumption could take that trend much further.

Nathaniel Bullard is a BloombergNEF analyst who writes the Sparklines newsletter about the global transition to renewable energy. 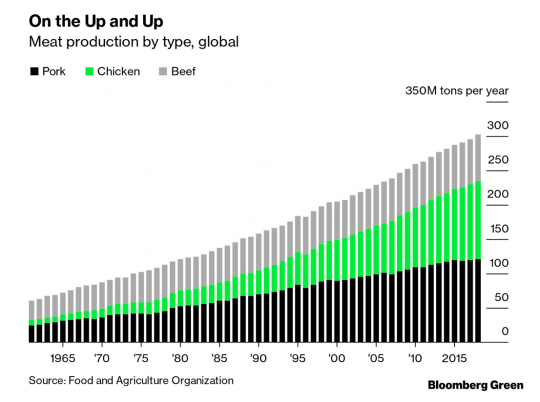 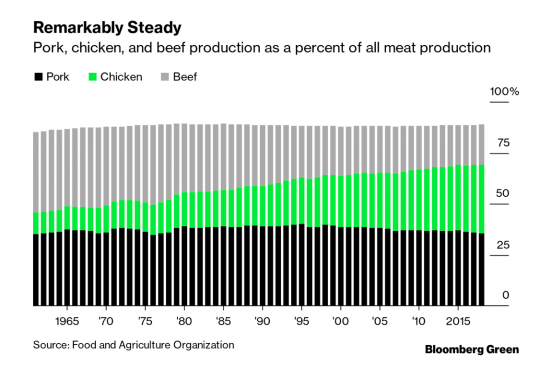 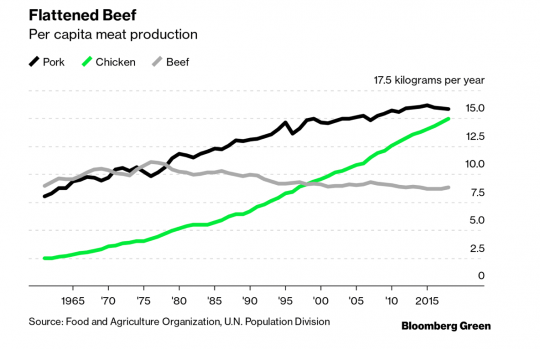