70% of German, French, Dutch consumers support 0% VAT rate on vegetables and fruits and a higher VAT rate on meat

A representative consumer survey amongst 1500 consumers in France, Germany and the Netherlands by DVJ Insights, a marketing research agency, showed that 70% of West-Europeans want politicians to change tax systems to make products like meat more expensive and reduce taxes on healthy products like vegetables and fruits to zero. This is also in line with the goals of the EU Green Deal ‘Farm to Fork Strategy’, to make 'healthy and sustainable food the easiest and most affordable choice'. Jeroom Remmers, director of TAPP Coalition, who commissioned the study: "The survey shows a majority of West-Europeans support meat taxes that half meat consumption by 2030, reduce GHG-emissions in Europe by 3 percent and EU health care costs by 9 billion euro per year".

TAPP Coalition is a European network promoting 'true prices, including environmental costs'. Fiscal reforms are needed to show consumers the real costs of food, and can help farmers to increase incomes to produce in a sustainable way The coalition consist of food companies, farmers, youth, animal welfare, environment and health organisations.

TAPP Coalition published a meat tax proposal 'Sustainability charge on meat' 5th February 2020 in the EU Parliament, leading new discussions in Europe about the low price of meat and to global media coverage. In the EU Farm to Fork Strategy, published 20th May 2020, the EU Commission admitted that meat prices are too low and that fiscal reform, legislation and voluntary actions at supermarket level are needed to change the situation. A voluntary EU Code of Conduct for retailers is now promoted by the EU commission to stop retailers to sell too cheap meat and other products with negative impacts on health and the planet. If this Code will not work the EU said to prepare. In addition, the Farm to Fork Strategy wrote: EU tax systems (ETS, VAT and import taxes) should reflect external costs of GHG emissions and pollution in food prices (e.g. meat and dairy). The German and Dutch Ministers of Agriculture now are preparing such meat taxes. The 2nd of March 2021 the German Agri Minister Julia Klockner published her plan for a higher VAT on meat: https://www.faz.net/aktuell/wirtschaft/steuer-auf-fleisch-und-milch-die-tierwohlabgabe-kann-kommen-17223545.html The Dutch Agri minister Carola Schouten wrote to the Dutch parliament end of sept 2020 to start preparing a meat tax proposal together with stakeholders. In June 2020 she asked political parties to take a meat tax serious. And she is serious about it: her political party Christian Union developed a double meat tax in its election program: a higher value added tax for meat and dairy (18,5%) and in addition an excise duty on chicken meat of 1 euro/kg, for pork 2 euro/kg and beef 3 euro/kg. This tax proposal was presented when PBL, the dutch government environmental agency, made a review of all (tax) proposals of election programs.

Results of the consumer survey

The survey showed that 88 percent of German, French and Dutch consumers are neutral or support a meat tax proposal made by TAPP Coalition to include all environmental costs of meat, if tax revenues are used to reduce VAT taxes on vegetables and fruit, support farmers on sustainability and animal welfare improvements and compensate low income groups; 55% percent of the consumers is positive about the proposal, only 12 percent is negative.

Some 80% of the German, 63% of the Dutch and 67% of the French participants are willing to pay a tax of at least 10 eurocents per 100 gram meat if revenues are used to pay farmers for improved animal welfare and CO2-reduction, and higher salaries for workers in slaughterhouses. Some 53% of the Germans also are willing to pay even more: at least 25 eurocents per 100 gram meat. The same holds for 39% of the French and 32% of the Dutch consumers. Surprisingly, voters of conservative or liberal parties in the three countries support such meat taxes even more, compared to voters of left wing parties.  In France for example, 70% of people voting for Macron’s political party ‘La Republic en Marche’ support a meat tax of 1 €/kg. Also 70% of people voting for the conservative party ‘Les Republicains’ support this tax, while ‘only’ 64% of the voters of the ‘Parti Socialiste’ support this meat tax proposal.

The EU Parliament discussed the EU Green Deal ‘Farm to Fork Strategy’ on January 25th, for which there will be held a voting in April (deadline for amendments is 2nd February).. In this Strategy, the EU commission proposed to reduce VAT tariff on (organic) vegetables and fruits to 0%. The survey by DVJ Insights showed large support for this plan: a wide majority in Germany (72%), Netherlands (64%) and France (75%) agrees “to reduce VAT tariffs on (organic) fruits, vegetables and other plant-based protein products to 0%, as well as a shift of meat products and unhealthy sugary drinks from the reduced VAT tariff to the normal ‘high’ VAT tariff”. The consumer survey shows that the Farm to Fork Strategy has wide support, if political leaders in EU Member States decide greening the VAT system at EU level. 50% of consumers in the three countries want supermarkets to increase prices on meat (25-35%), charging a lower price (25-35% cheaper) for fruit, vegetables and other healthy / sustainable foods. The EU Commission proposal to introduce a carbon border adjustment mechanism is widely supported: 67% of Germans, 54% of Dutch and 72% of French consumers support it, which protects EU farmers and the climate.

Jeroom Remmers, director of the TAPP Coalition comments: “The consumer survey shows a political reality: a majority of West European consumers expect their political leaders to tax meat products to use revenues to reduce VAT taxes on vegetables, fruits and meat alternatives and pay farmers to increase animal welfare and green standards. We expect EU Ministers to start the legislation at national and the EU levels. They can reduce GHG-emissions and biodiversity loss from food, while protecting EU farmers, improving public health and reducing health care costs for consumers.”

About the TAPP Coalition

The True Animal Protein Price Coalition is a European non-profit organization of health, environmental, animal welfare, and youth organizations as well as food companies that advocates for the “true” price of meat and dairy which reflects the associated environmental and health costs. In February 2020, the TAPP Coalition published a report, “Aligning food prices with the European Green Deal”. https://www.tappcoalition.eu/nieuws/13130/eu-parliament-to-discuss-dutch-proposal-for-a-fair-meat-price-5th-of-feb The revenues of this “fair price” can be used to make agriculture more sustainable, improve animal welfare, compensate low incomes, and reduce the price of vegetables, fruits and meat alternatives (with lower VAT tariffs or consumer subsidies). This measure at the EU level will reduce GHG-emissions with 120M tons per year and health care costs with at least 9 million euro annually, as meat consumption will decrease. Over the past year, political support has been garnered on a country level, specifically in the Netherlands and Germany, as well as at a EU level after a presentation to the European Parliament, resulting in global media coverage. TAPP Coalition started an EU petition: https://goodfoodprice.eu

The consumer survey was run last October amongst 1558 consumers across France (n=531), Germany (n=514), and the Netherlands (n=513) with an appropriate distribution across gender, age, income and political background. Consumers in the three countries represent nearly 40% of the EU-27 population (without UK) and more than 80% of Western Europe (UN definition). The survey results demonstrate that (West) Europeans are ready for a meat tax if revenues are used in a clever way for farmers and consumers. TAPP Coalition is looking for funding to run a next enquiry in 2021 in more EU countries. 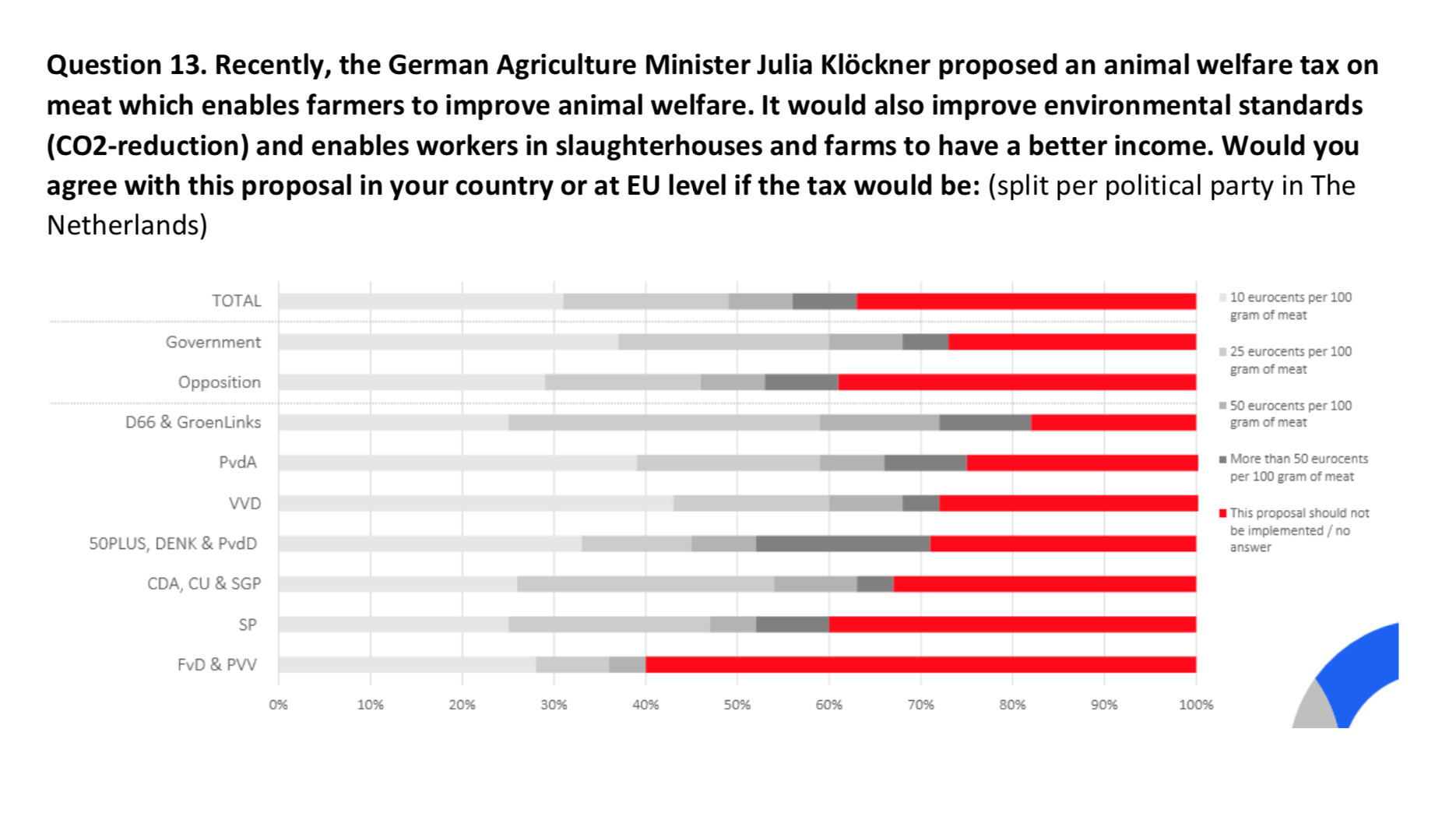 Publications in media about this survey (selection): 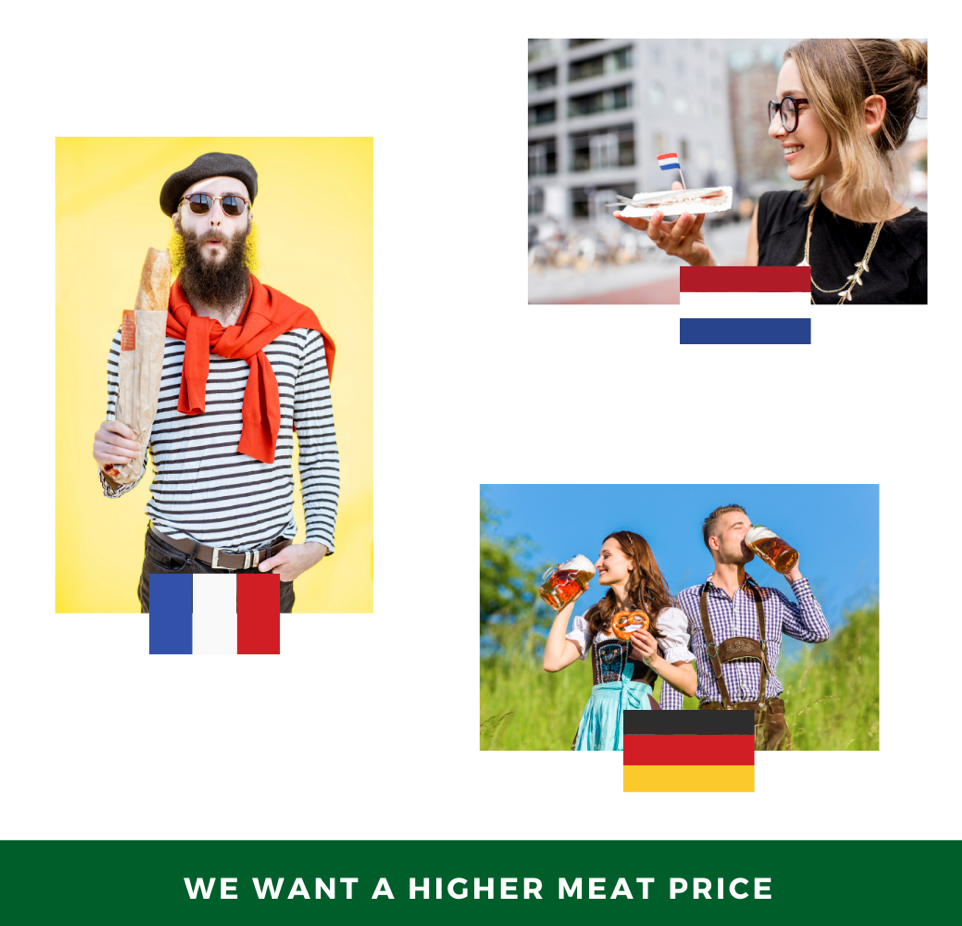 Background info: Last year, Tapp Coalition published a report in the EU Parliament about the benefits of meat taxes in Europe for farmers and consumers, which became news in the whole world. https://tappcoalition.eu/nieuws/pagina/3 . For instance, see this article in Guardian 4th Feb 2020:  https://www.theguardian.com/environment/2020/feb/04/eu-meat-tax-climate-emergencyNow, the German and Dutch government are making preparations for introducing meat taxes - using revenues to support farmers to increase standards for sustainability or animal welfare. See:
https://tappcoalition.eu/nieuws/14301/german-cdu-agriculture-minister-julia-glockner-proposes-a-tax-on-meat

Our meat tax proposal published 5th Feb 2020 in the EU Parliament has led to a new initiative of the EU Commission to admit that meat prices are too low, they wrote in the Farm to Fork Strategy. If a voluntary EU Code of Conduct will not stop retail to sell meat at too low prices, legislation will start, was announced. In addition , the Farm to Fork Strategy wrote :

Tax incentives should also drive the transition to a sustainable food system and encourage consumers to choose sustainable and healthy diets. The Commission’s proposal on VAT rates (currently being discussed in the Council) could allow Member States to make more targeted use of rates, for instance to support organic fruit and vegetables. EU tax systems should also aim to ensure that the price of different foods reflects their real costs in terms of use of finite natural resources, pollution, GHG emissions and other environmental externalities. See page 15   https://ec.europa.eu/food/sites/food/files/safety/docs/f2f_action-plan_2020_strategy-info_en.pdf

In other words: EU tax systems (ETS system, VAT system) should reflect costs of GHG emissions of meat and dairy prices. It is still a matter of time when if will happen.

Overview of publications about the survey: 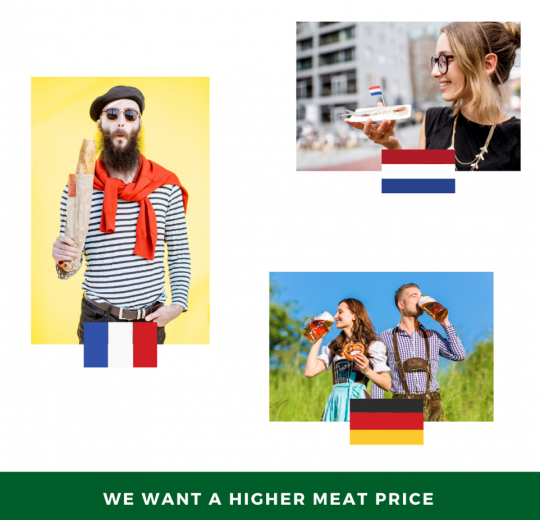 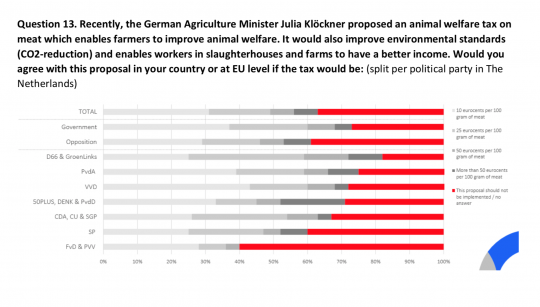